Javea is renowned for its wonderful beaches.

There are plenty to choose from as Javea is a fairly large area, spread out between the Cap de San Antonio in the north and the Cab de La Nao in the south. There are probably about 15 beaches in total but some of these are very small and some are only accessible by boat. We will cover the main 6 beaches here, starting at the Port which is nestled below the Cap de San Antonio. 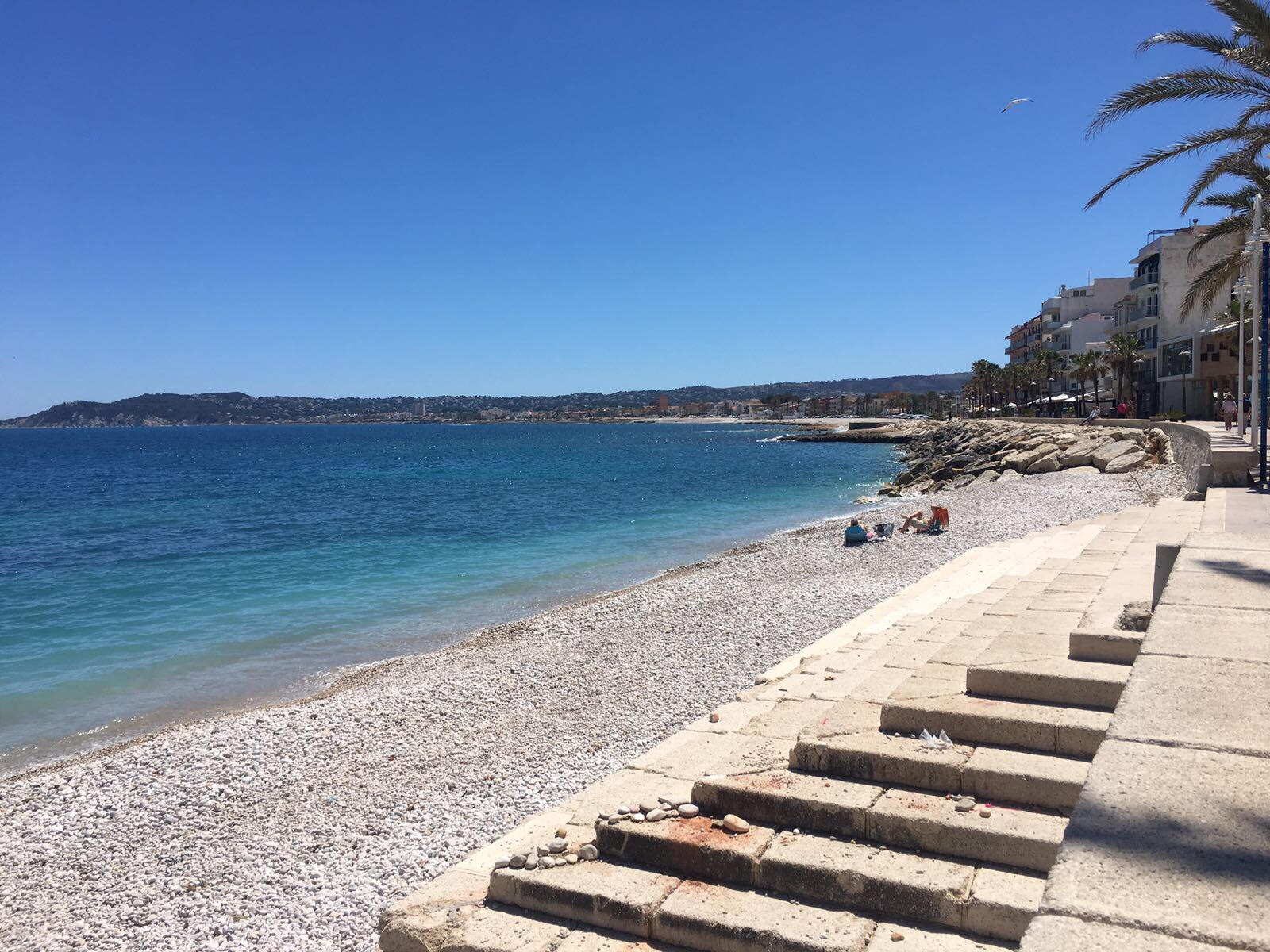 The La Grava beach can be found in the heart of the bustling Javea Port. The beach itself is pebbly but don’t let that put you off. It’s a lovely beach with great swimming and is a stone’s throw from a wide variety of bars, restaurants, cafes and shops. There’s no better place to relax in the port and it’s a great vantage point to view the variety of boats that come and go to the adjacent marina. The beach is very popular with the Spanish and as parking in the Port is fairly limited, it’s advisable to get there early, especially in July and August. La Grava is great for kids as it’s safe swimming and in the summer there is an inflatable playground a short swim from the beach which includes rafts, slides and ping platforms. If you fancy a stroll, walk to the end of the marina road and you’ll find a secret little beach which not that many people know about. There’s also a delightful tapas bar here with views to die for from its open terrace. 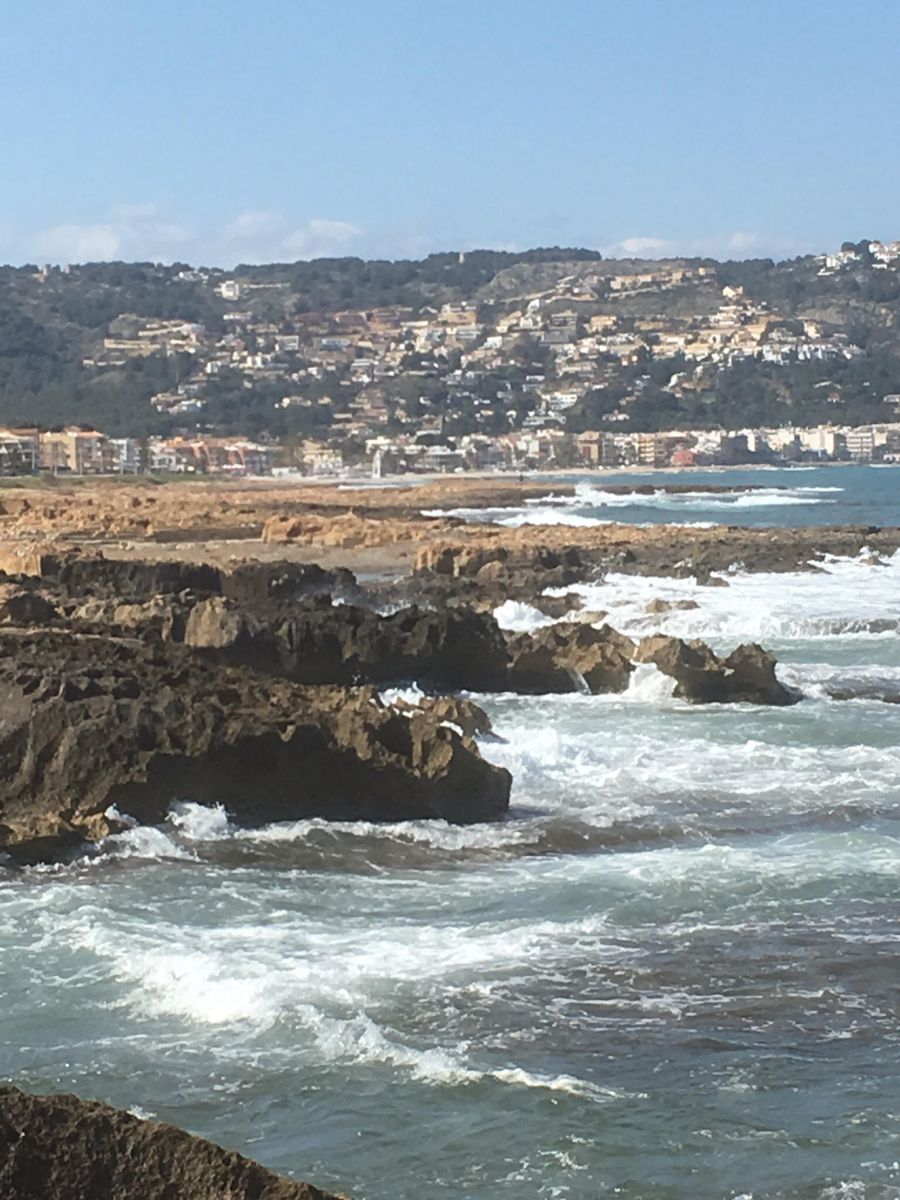 The Playa Muntanya stretches for nearly two kilometres from the Port to the Parador Hotel on the Playa Arena. The first half is similar to La Grava beach in the Port. It’s pebbly but still offers safe swimming and there’s much more room so it doesn’t get as crowded. 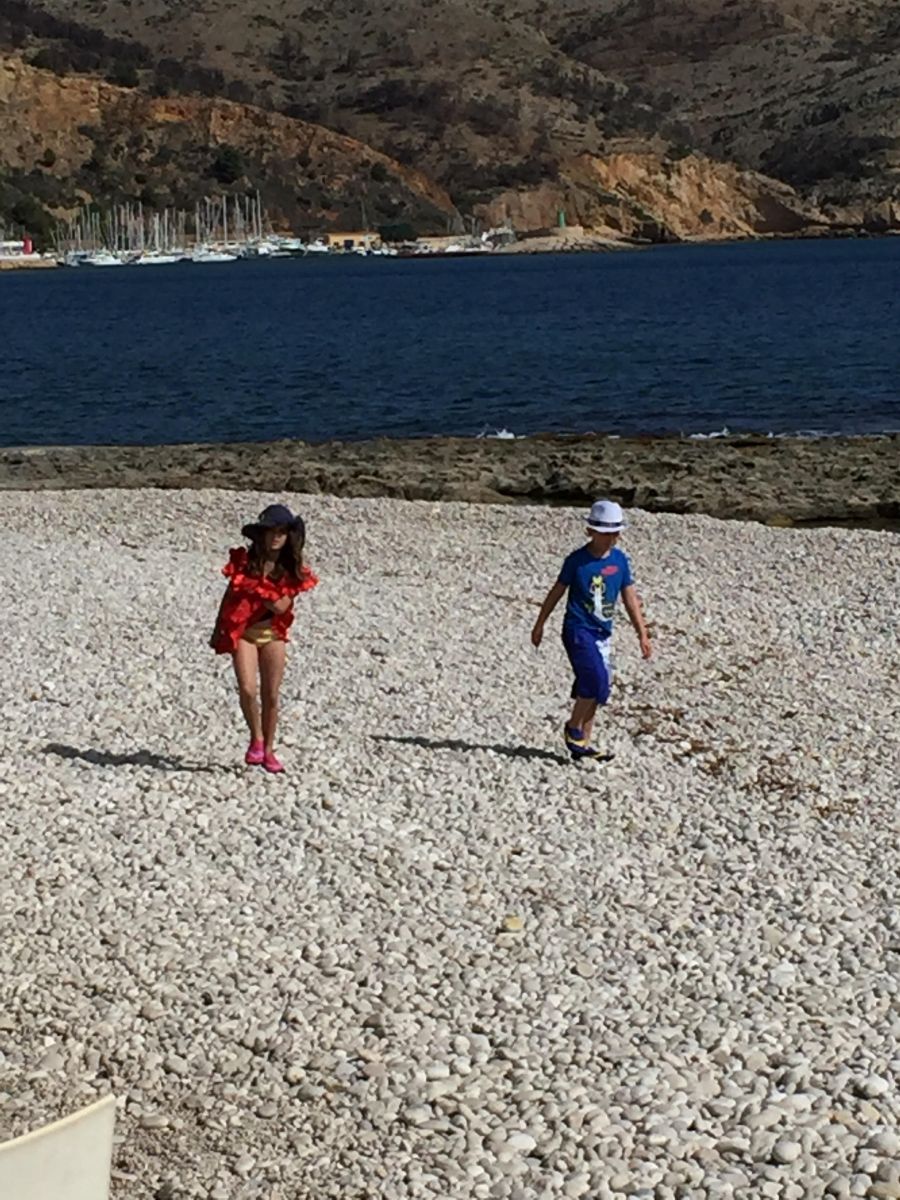 As well as being more spacious, there’s also more parking as cars are allowed to park on the fringe of the beach on the main road to the Arenal. Having said that, it’s still an idea to get here early in the busier months. Again, this is a very child friendly beach and for the more adventurous there are a variety of watersport activities here including pedalos, jet skis, kite surfing and even water propelled jet packs!

The Muntanya beach is famous for several things, one of it being the beach bars (chiringuitas) which are open from April to October. They are essentially just shacks which offer cold drinks and usually quite basic food. But they are lovely to spend a few hours in, taking in the wonderful sea views. Also, they usually have a couple of portaloos which is handy if you have children. Perhaps the most well known bar on this stretch of beach is called La Siesta. It’s a permanent building (the chiringuitas disappear in October) and offers a wonderful Ibiza style experience of sprawling sofas and hammocks and it’s a fantastic place to spend an afternoon. The food here is great too.

The Siesta bar is situated about half way along the 2km Muntanya beach. From here to the Parador hotel at its end, the beach becomes much more rocky. It’s still popular as there are hundreds of rock pools here, full of interesting marine life. So it’s very popular with the kids.

As you get further towards the Parador Hotel, you can clearly see how the rock has been harvested for the local Tosca sandstone. This harvesting was outlawed in the 1970s but the scars remain and it’s believed that the stone was first used by the Romans. 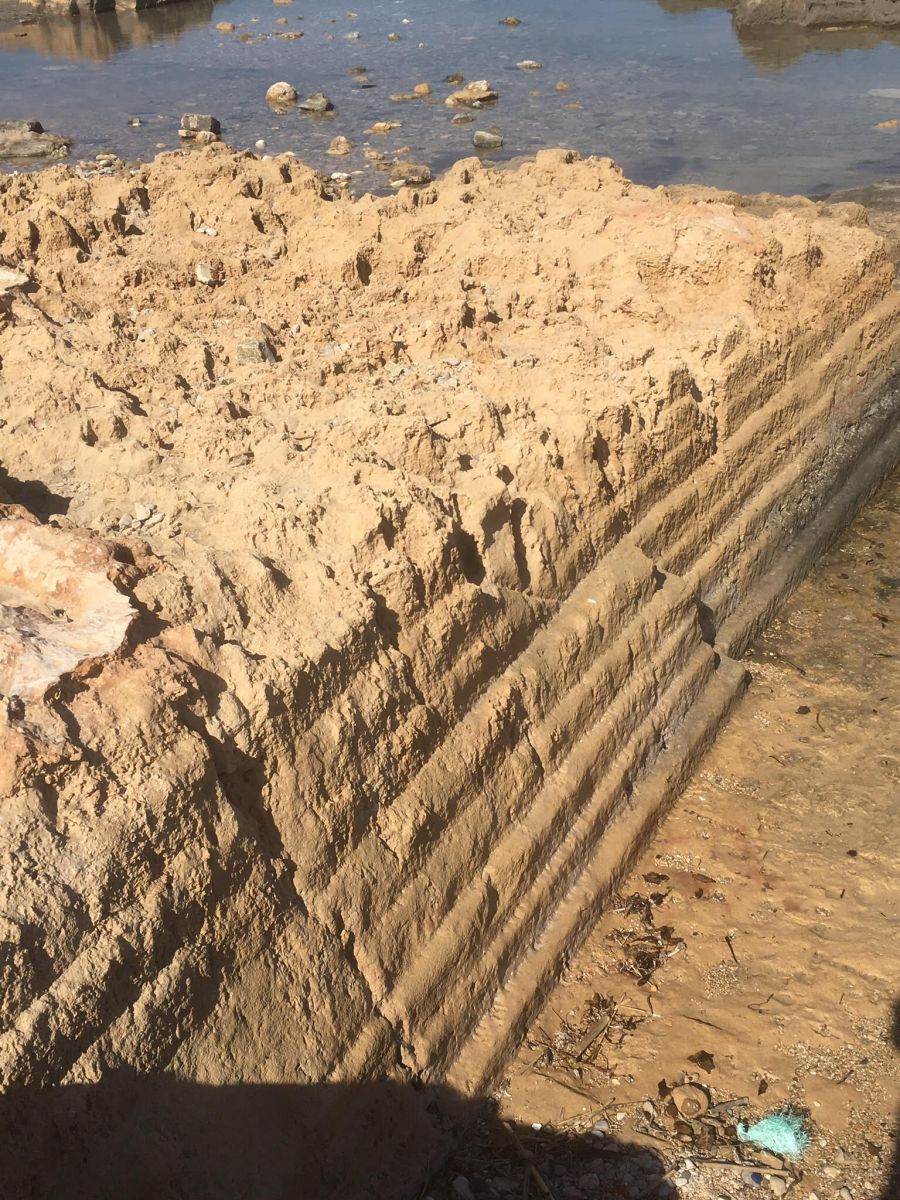 Again, parking on the edge of the beach is permitted and this stretch also offers a handful of the very handy chiringuitas. As well as these, there are a number of very well established restaurants just behind the beach, across the main road. This part of the Muntanya is very popular with Spanish families and it’s a long held tradition to have family barbeques on Sunday evenings. 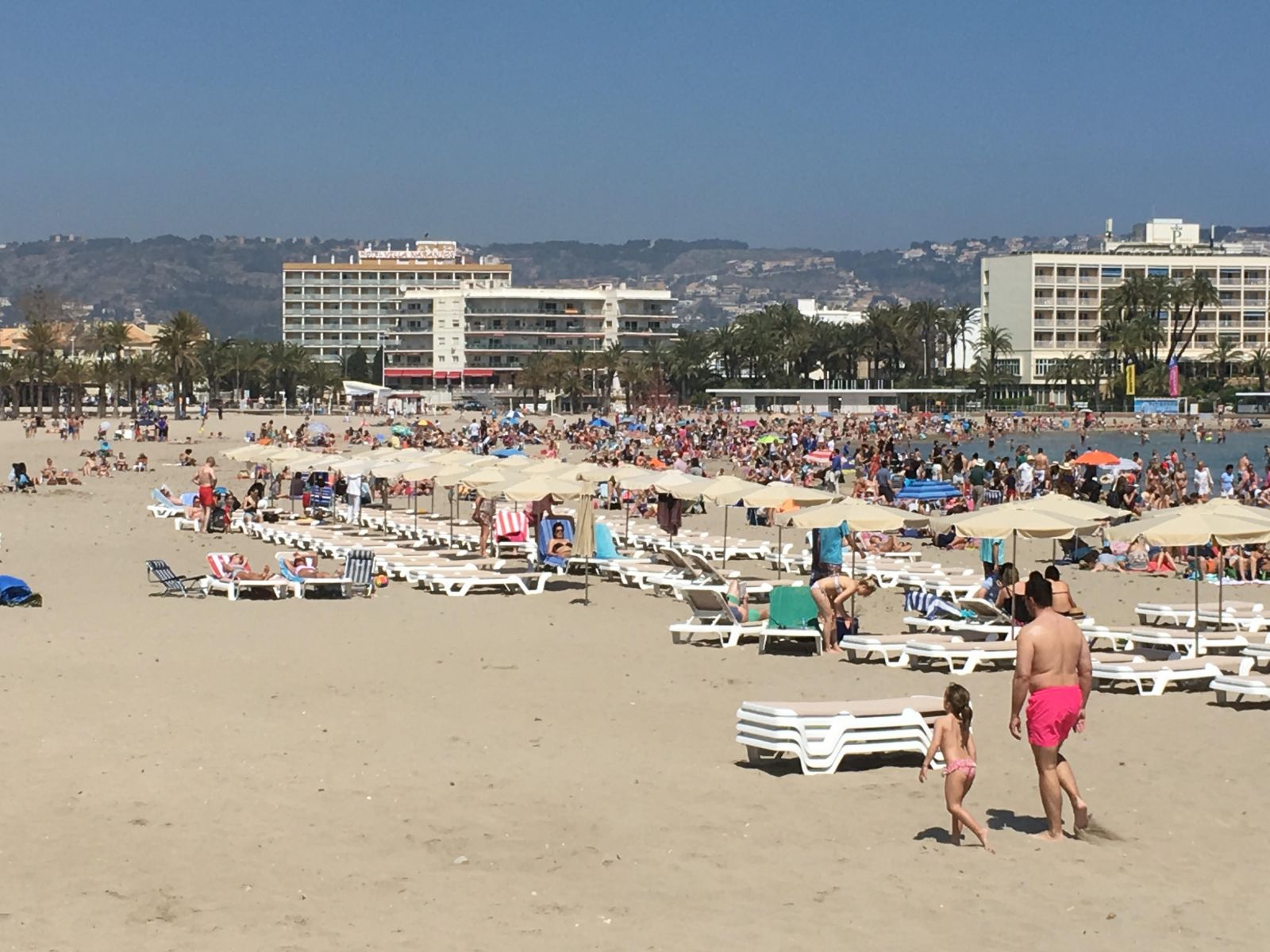 As you reach the Parador Hotel at the end of the Muntanya beach, the vast sandy Arenal beach comes into view. It really is the jewel in the crown of the resort of Javea. The bay of the Arenal is horseshoe shaped and the beach is about 1 kilometre long. The swimming here is probably the best in the area, especially for children as you can walk out at least one hundred metres before you need to start swimming. The sea temperature maintains a steady 30 degrees right up until October so it’s very busy until the later months in the year.

From April to October there are plenty of sunbeds and parasols for hire and the local council places rafts along the shore for sunbathing and ping. There’s plenty of room here so although it gets busy, there always seems to be space for everyone. Towards the back of the beach there are volleyball nets and several adventure playground features for the little ones. The beach is also cleaned every evening.

Behind the beach is a wide promenade, suitable for a leisurely stroll or for a more vigorous roller skate or bike ride. Flanking the promenade are numerous bars, restaurants and shops which are not only popular with the beach crowd during the day, also provide Javea with a vibrant and bustling nightlife. 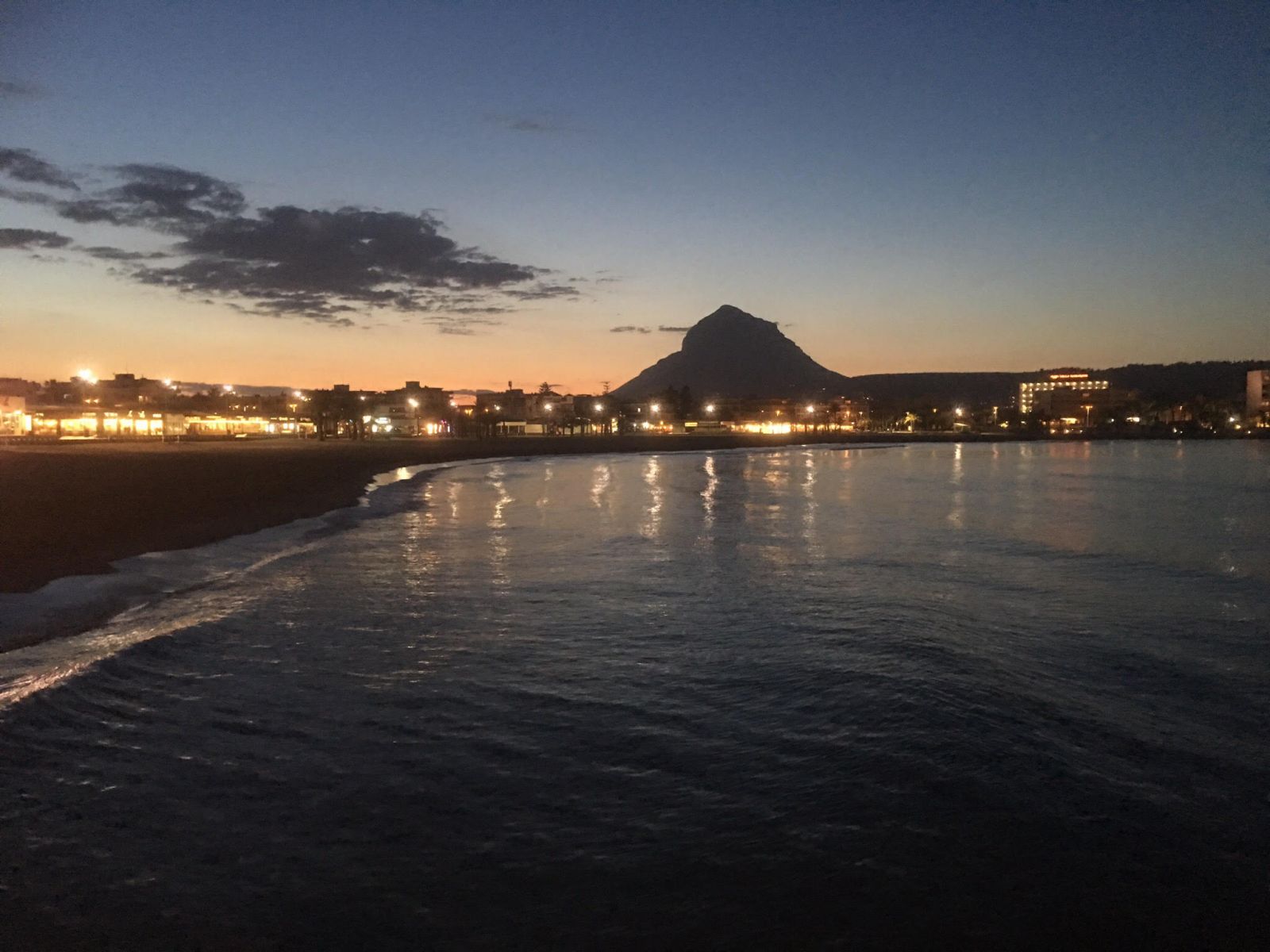 Many years ago when we first arrived in the area, parking here was quite straightforward but now it’s the early bird who catches the worm so it’s advisable to get there early or you’ll face a long walk if you have to park your car. Many people get taxis to the beach or walk if it’s not too far.

The beach is very child friendly. As well as being very shallow to swim in, there is also a Red Cross medical centre on the beach just in case. There are also plenty of facilities in the adjacent bars and restaurants. In the summer, there are outdoor cinema screens on the beach on Tuesday evenings which the kids will love. 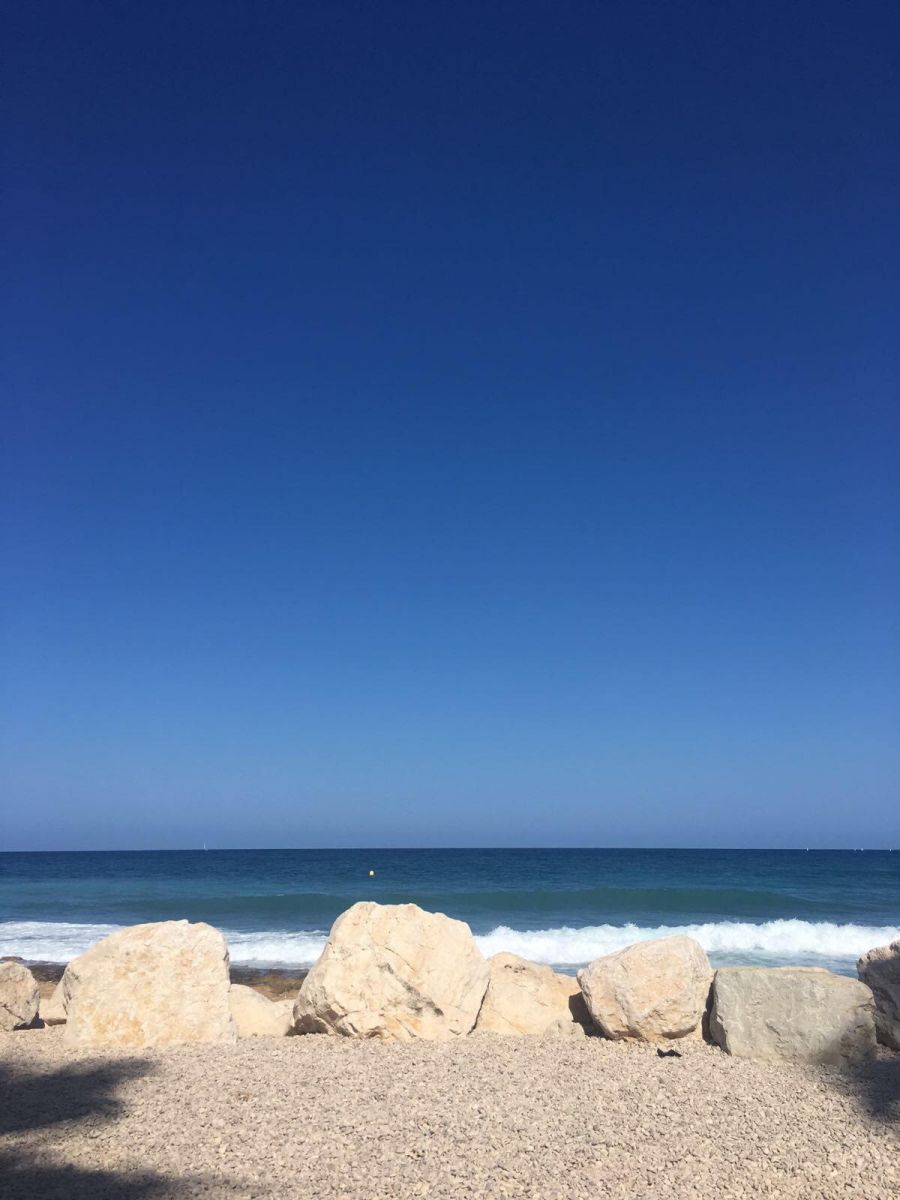 A short stroll from the southern end of the Arenal leads you to Cala Blanca. It’s a pebbly and rocky beach and is named after the white stones littered along its shore. It’s a slightly less well known beach and can be a relative haven of peace on the busy summer days. It’s generally locals that use this beach but although not so well known, it’s well worth a visit.

It’s only a short beach, around 300 metres in length and consists of three small coves which can only be accessed by climbing and descending some steep steps hewn into the cliff face. It’s well worth the effort though as the coves are stunning and offer great swimming and even better views.

At the beginning of the beach is a chiringuita, or beach bar. It is fairly rustic and its seating is an eclectic mix of seemingly abandoned plastic chairs but the views are great and the food better. 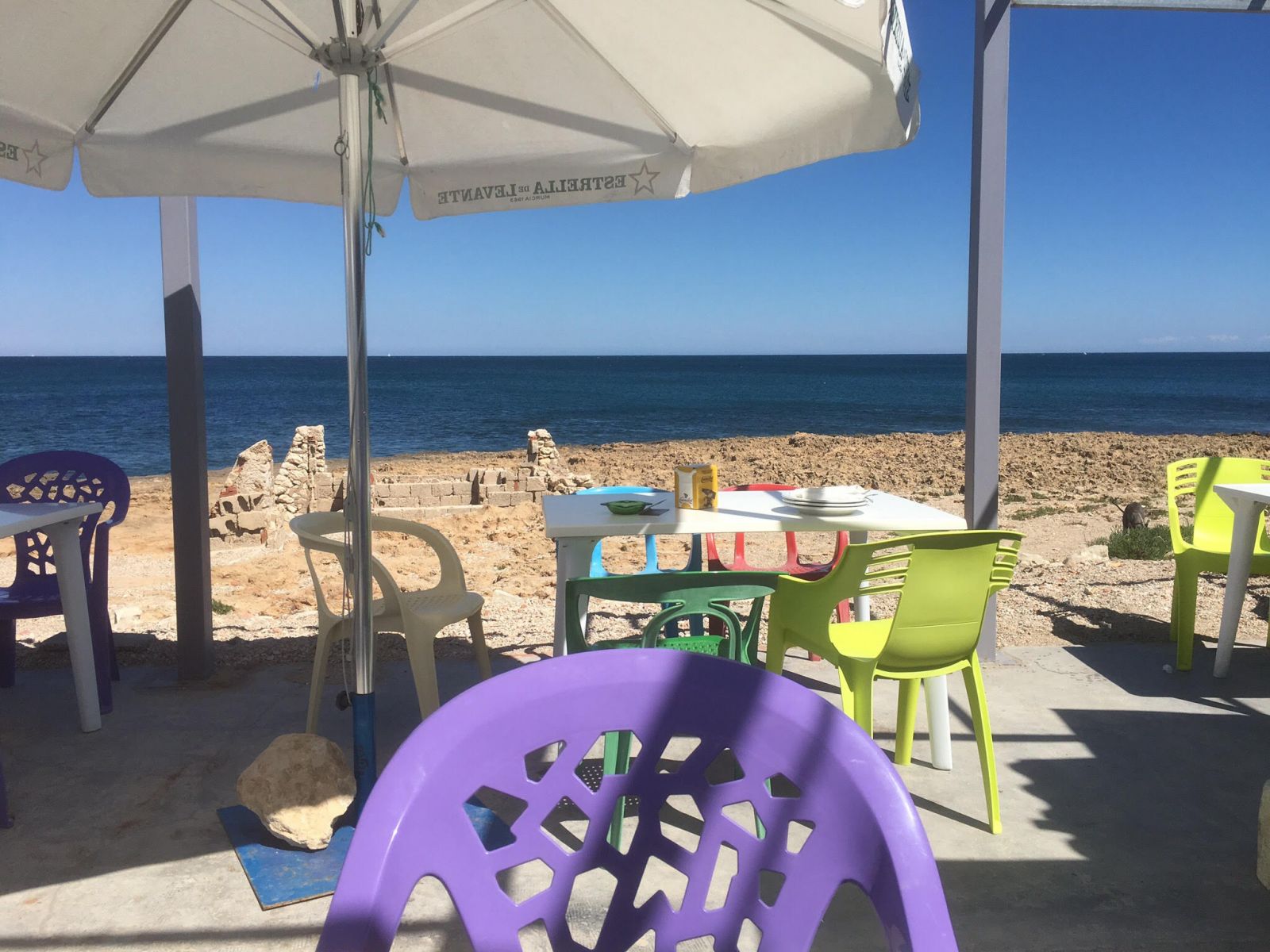 Right next to the bar there is a fairly large swimming pool just above the beach. It’s free to swim in but is filled by sea water. It’s not that deep and is safe for the kids to swim in whilst the adults enjoy the food and the view. There is a small toilet facility here, the only one nearby.

Parking here isn’t as bad as the other beaches but as usual, either get there early or prepare for a bit of a stroll. If you want to eat in the chiringuita, it’s best to reserve a table as soon as you get there. 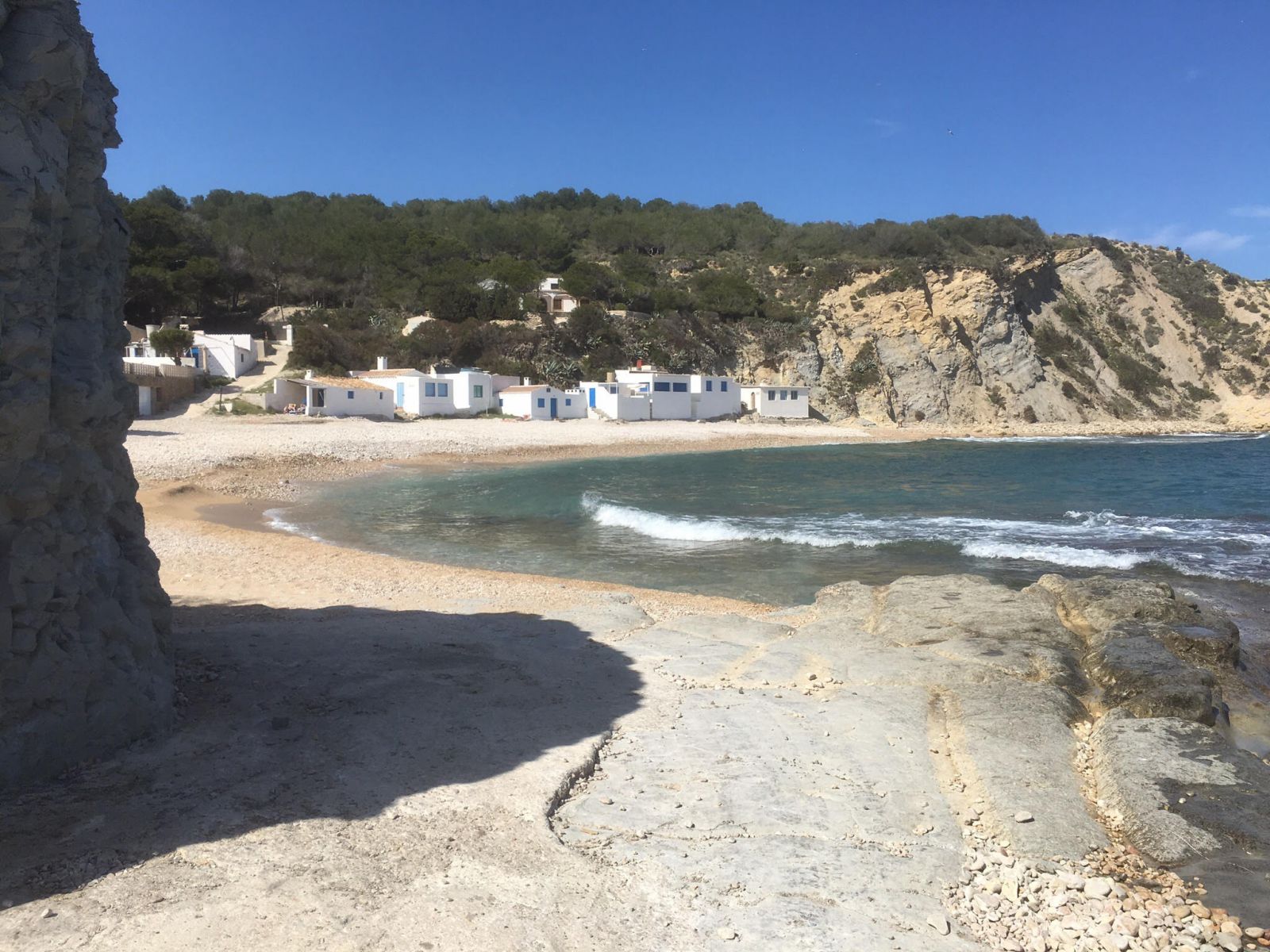 If you head out of Javea by car, take the road to Cab de la Nao. This winding road will lead you through pine forests and occasionally you will see a restaurant or two, all of them very good. After about 3 miles, you’ll see a sign to the left directing you to Cala Portixol. Or Portichol. After a steep descent you’ll see a parking area which is quite small. If you can park up, head through the narrow lane and here is Cala Portixol, one of our favourite beaches in Javea.

At just under 900 metres wide, it’s fairly small and is once again pebbly. It’s situated between two headlands called Cap Prim and Cap Negre. Its waters are shallow and clear and it offers some of the best scuba ping and snorkeling on the Costa Blanca. 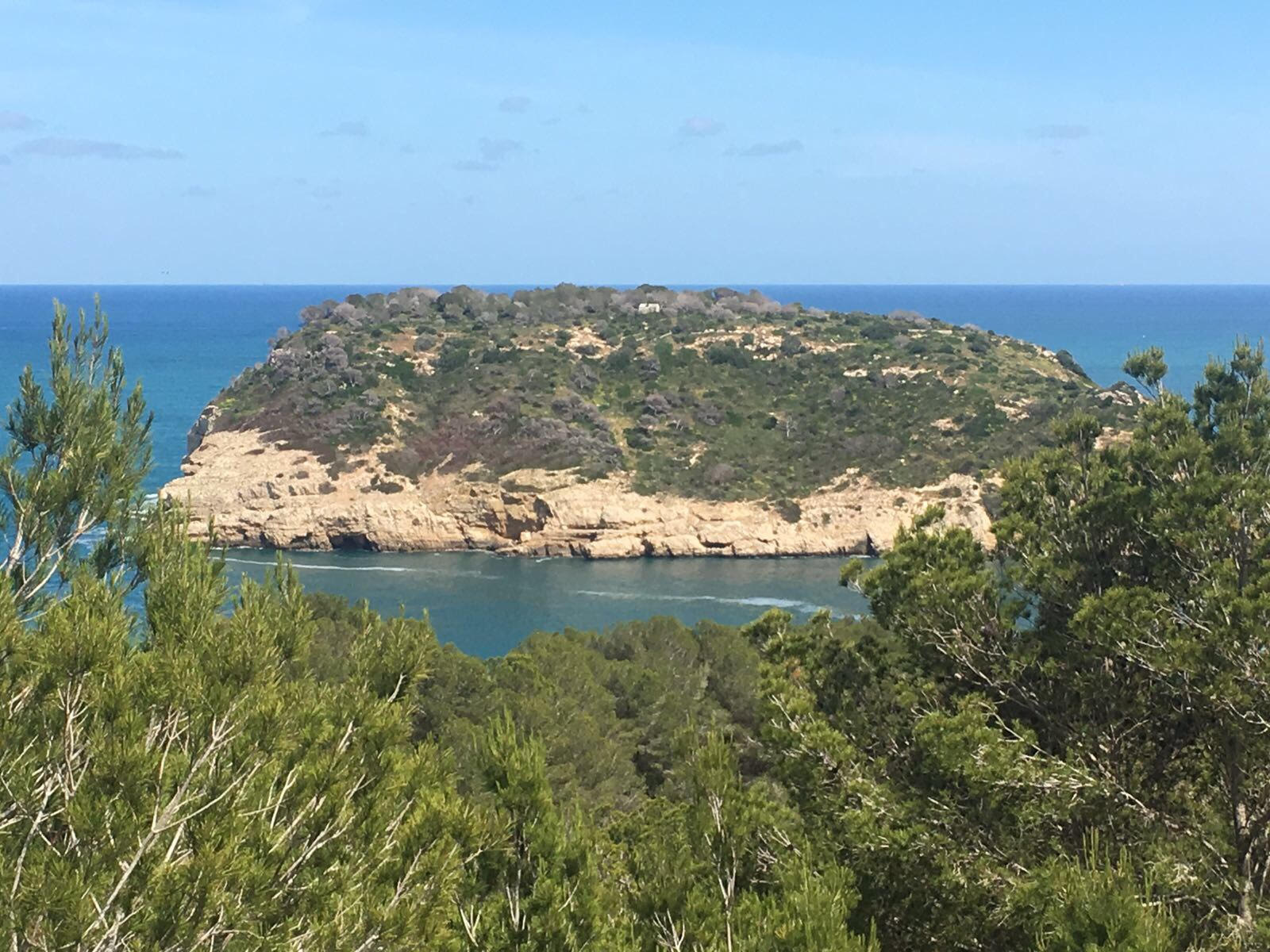 The beach takes it’s name from a small island a few hundred metres from the shore. It’s uninhabited but for the more adventurous and stronger swimmers, it’s worth a look. Its history is obviously steeped in the fishing industry as many of the original fishing huts remain today.

If you walk around the corner, there is a lovely beach bar here, serving tapas and cold drinks in the height of the season.

One memory we have of this beach is that during the summer they used to barbeque sardines at lunchtime and we could smell them miles before we got there. Facilities and parking here are limited but it’s definitely worth a visit. 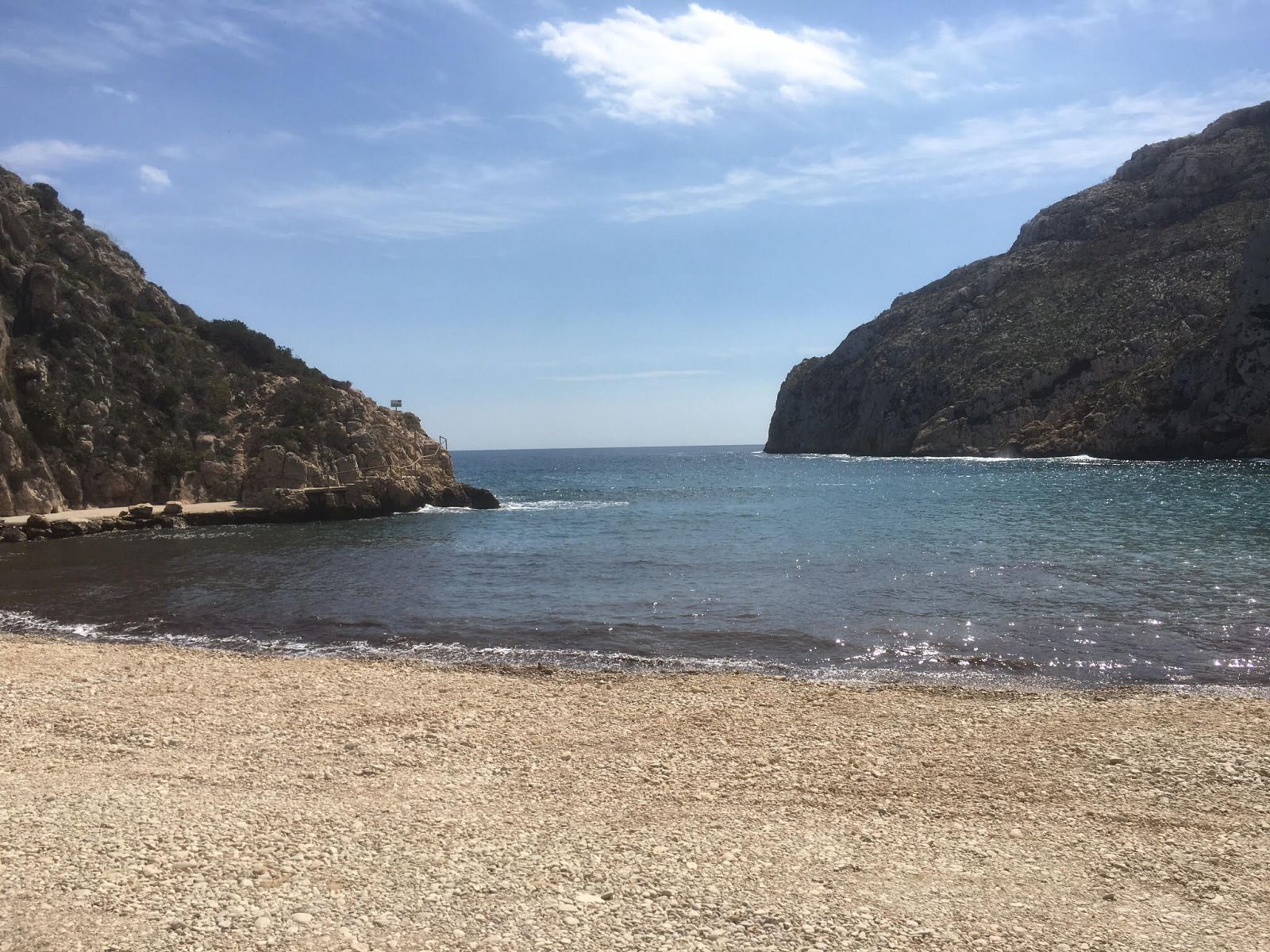 A little further on from Portixol, on the road to Cab de la Nao, you’ll see a right turn towards Granadella. Follow this road and it will lead you down, through the pine forest, to one of the prettiest beaches not just in Javea, but perhaps the whole of the Costa Blanca.

Granadella used to be a very well kept secret. As recent as ten years ago, you could go there on a busy August weekend safe in the knowledge that you would have a very quiet and relaxing day. Today it’s different as word has spread. During the summer peak weeks, the beach offers standing room only. It’s fairly small, just a cove really. It’s pebbly and the swimming is safe and the snorkeling is incredible.

There is a restaurant offering decent fare but at eye watering prices. Its terrace faces the beach and the views are stunning. Next door to this is a more down to earth option, a tapas bar that is more reasonably priced. Both sell ice creams for the kids and both have lavatories.

If you venture just up the lane from the beach, you will see a row of old fishermen’s houses which tell you that Granadella was once a busy little fishing village. These are now all holiday lets which is hardly surprising. 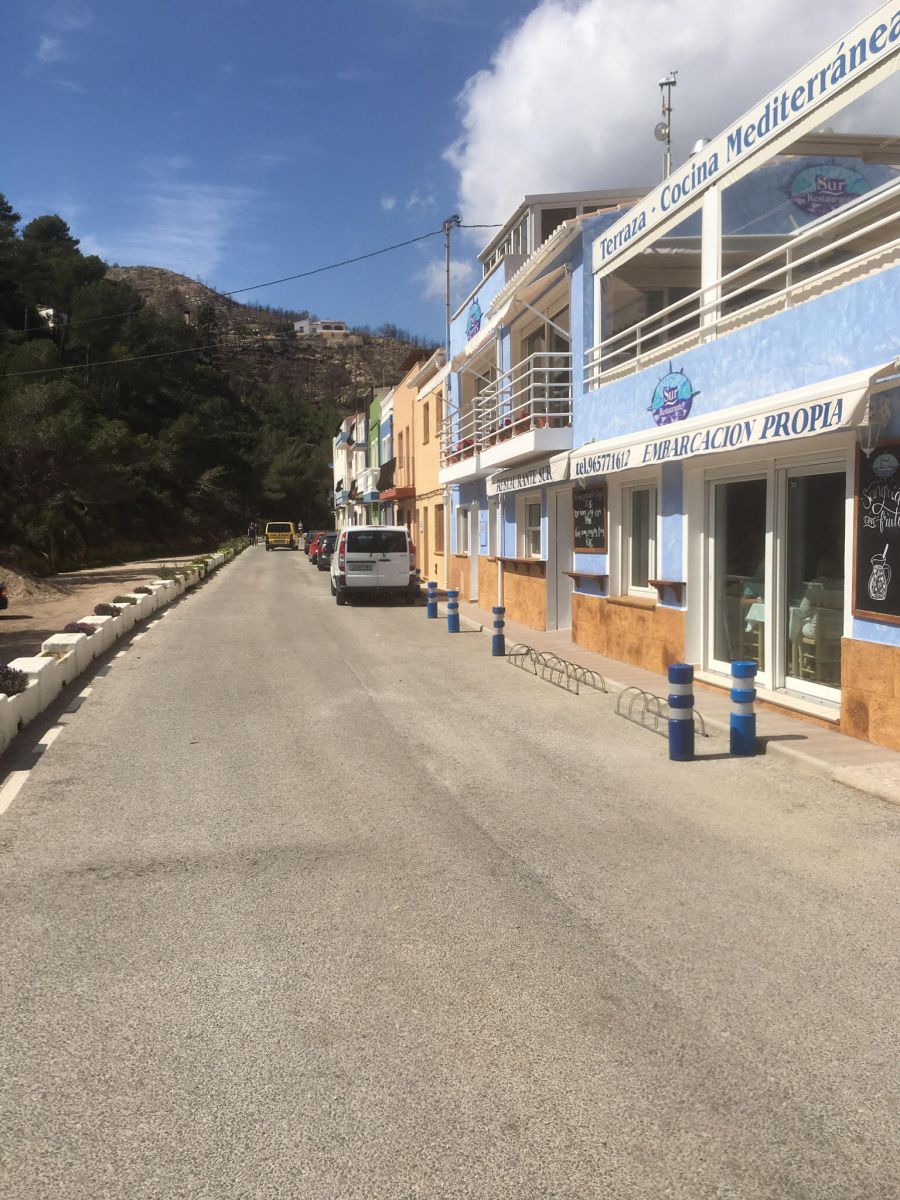 This picture was taken in the Spring so it looks very quiet. Don’t be fooled! In summer it is absolutely heaving but if you can stomach the crowds and want a day witnessing the beauty of the Costa Blanca, this is the place to come.