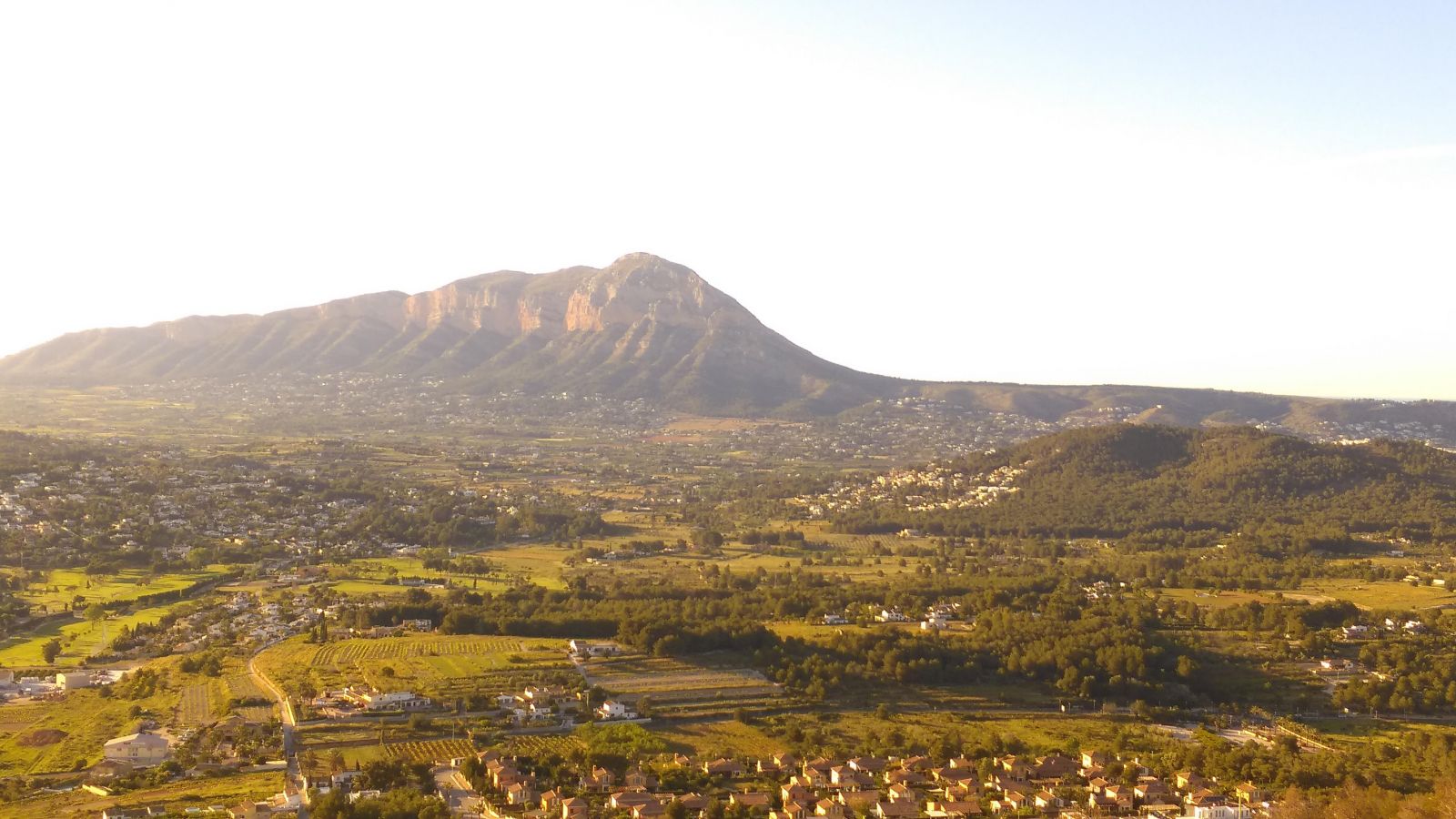 Rising 753 metres above sea level, the Montgo Mountain (or Montgo Massif) dominates the skyline of Javea.  Affectionately referred to by locals as ‘El Elefante’ due to its striking resemblance to the head and trunk of an elephant, Montgo is the last mountain on the eastern most point of the Cordillera Prebética range which stretches across the entire southern Iberian Peninsula.

Its limestone structure means that it is renowned for its craggy appearance, a multitude of caves and its almost uncanny ability to change colour throughout the day, depending upon the strength and direction of the sun.

There is evidence of human inhabitation from at least 30,000 years ago, with archaeological finds such as cave paintings, ancient cemeteries, Greek and Roman artefacts and the remains of some of the earliest settlements recorded on the Iberian Peninsula.

In 1987, the entire area of Montgo, some 5312 acres, was designated a nature reserve which includes the mountain itself and also approximately 3km of coastline.

The reserve contains a wide variety of flora (650 species, 80 of which are considered to be rare and in danger of becoming extinct) and fauna (150 species) some of which are unique to the area, thus gaining protected status. In terms of flora, these include species of ancient oak, wild palm trees, rare violets and many varieties of medicinal herbs. The fauna of Montgo includes 8 different birds of prey (including Bonelli eagles, kestrels and eagle owls) which feed upon a wide variety of the mountain’s other fauna, including bats, badgers, snakes and weasels.

Cave of the Barranc del Migdia 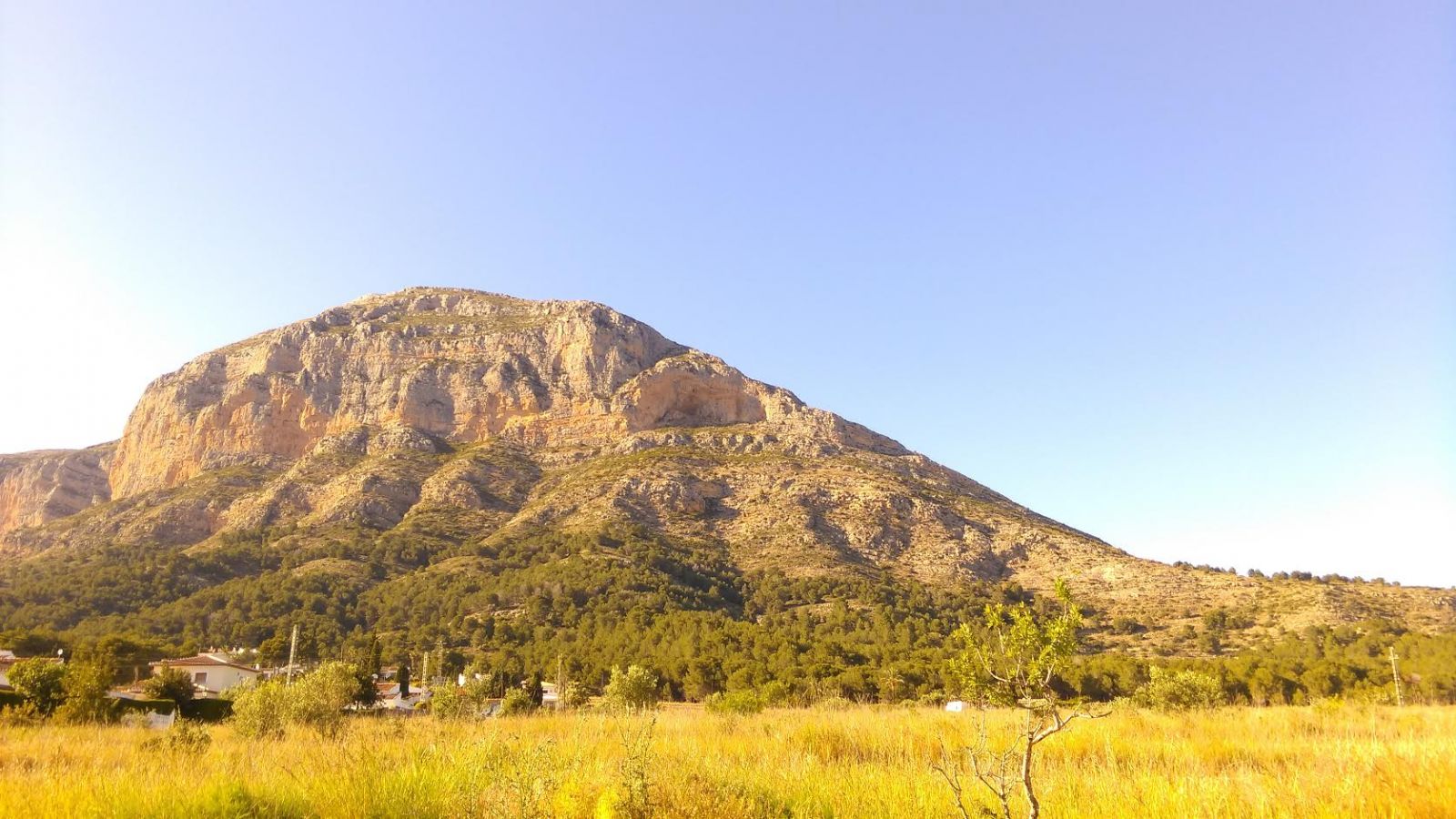 Just over half way up the summit of the south side of the Montgo is a familiar site to all Javea residents. It is the Cave of the Barranc del Migdia. It’s so familiar because it represents the ‘eye’ of the wise old elephant which stands guard over the town.

Until 1989, this was its only remarkable feature but then it was discovered that the site holds a long kept secret. The cave is actually home to an historically important group of rock paintings. Their schematic (ie a figurative style of art where only the basic outlines of its subjects are depicted) design is typical of Iberian artwork from the Bronze Age. 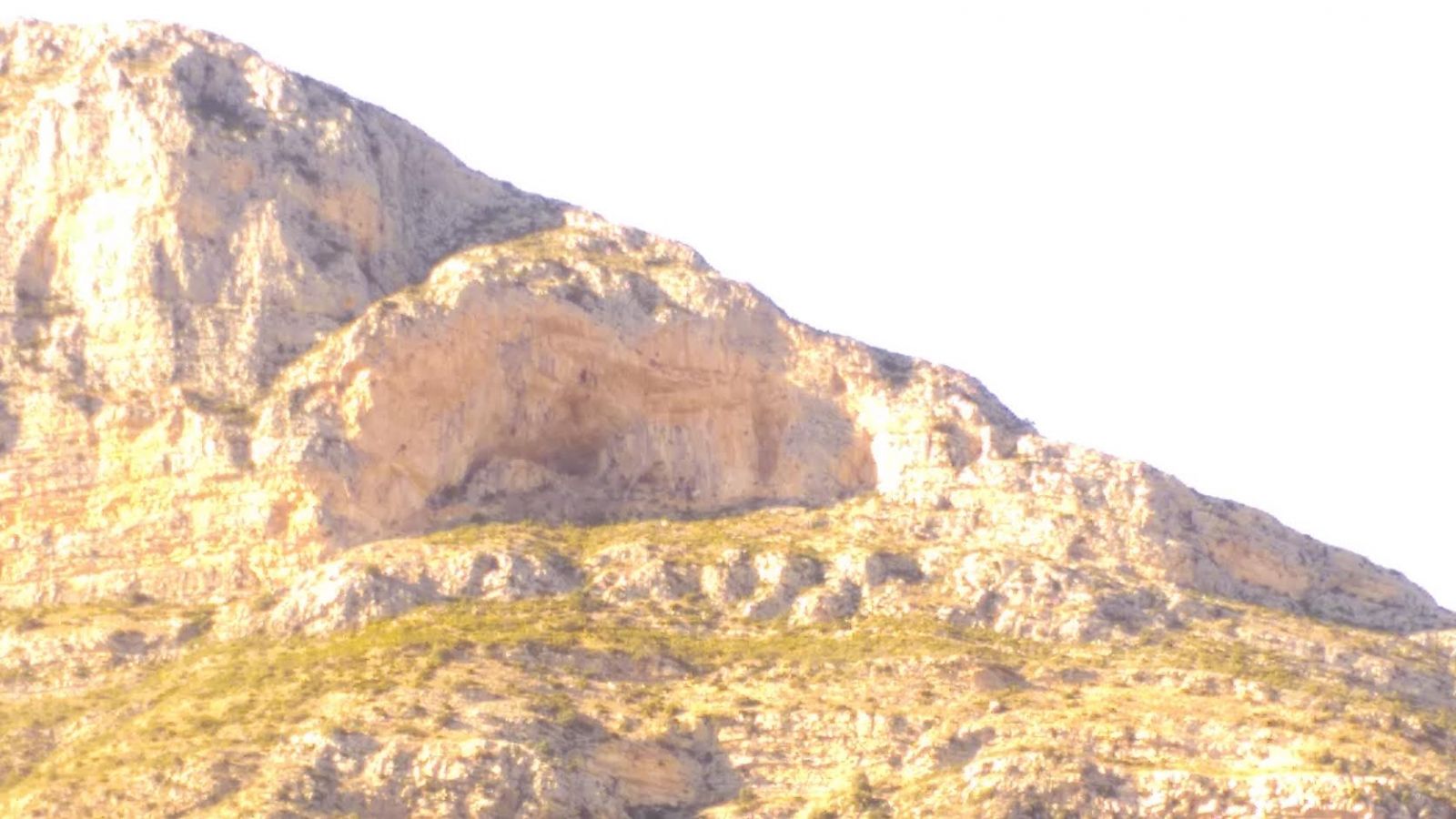 Some 20 years later in 2009, an official archaeological excavation was conducted in the central hall of the cave. It was discovered that this central hall had been used as a prehistoric burial chamber and eventually the remains of 8 people were uncovered.

The remains were classed as ‘secondary burials’ as the bones were discovered wrapped in bundles which indicates that the skeletal remains had been transferred from another burial site. Within the bundles of bones were also objects intended to assist the dead in their next life. Such objects included weapons, jewellery, tools and cooking vessels. Subsequent carbon dating tests revealed the bones date back to the late Neolithic times, some 5000 years ago.

Experts believe the remains are from the nomadic settlers who occupied the region during that era and probably lived in small settlements surviving off the abundant natural resources in the area.

The cave would have been a significant landmark for these peoples and it seems natural that they would feel a connection to the site and deem it a suitable place to lay to rest their ancestors.

Indeed, it was not just these late Neolithic nomads that revered the cave. There has been later evidence found of Roman and then Moorish presence in the cave, including a rare collection of Almohedian coins, which can be viewed in the Soler Blasco Museum in Javea’s old town.

Archaeological investigations into the cave are ongoing with important DNA tests being conducted in Germany to try and determine the exact nature of the burials conducted here.

Whatever the outcome of these tests, the inhabitants of Javea will be forever intrigued by the Cave of the Barranc del Migdia and although quite difficult to access, it’s well worth a visit. 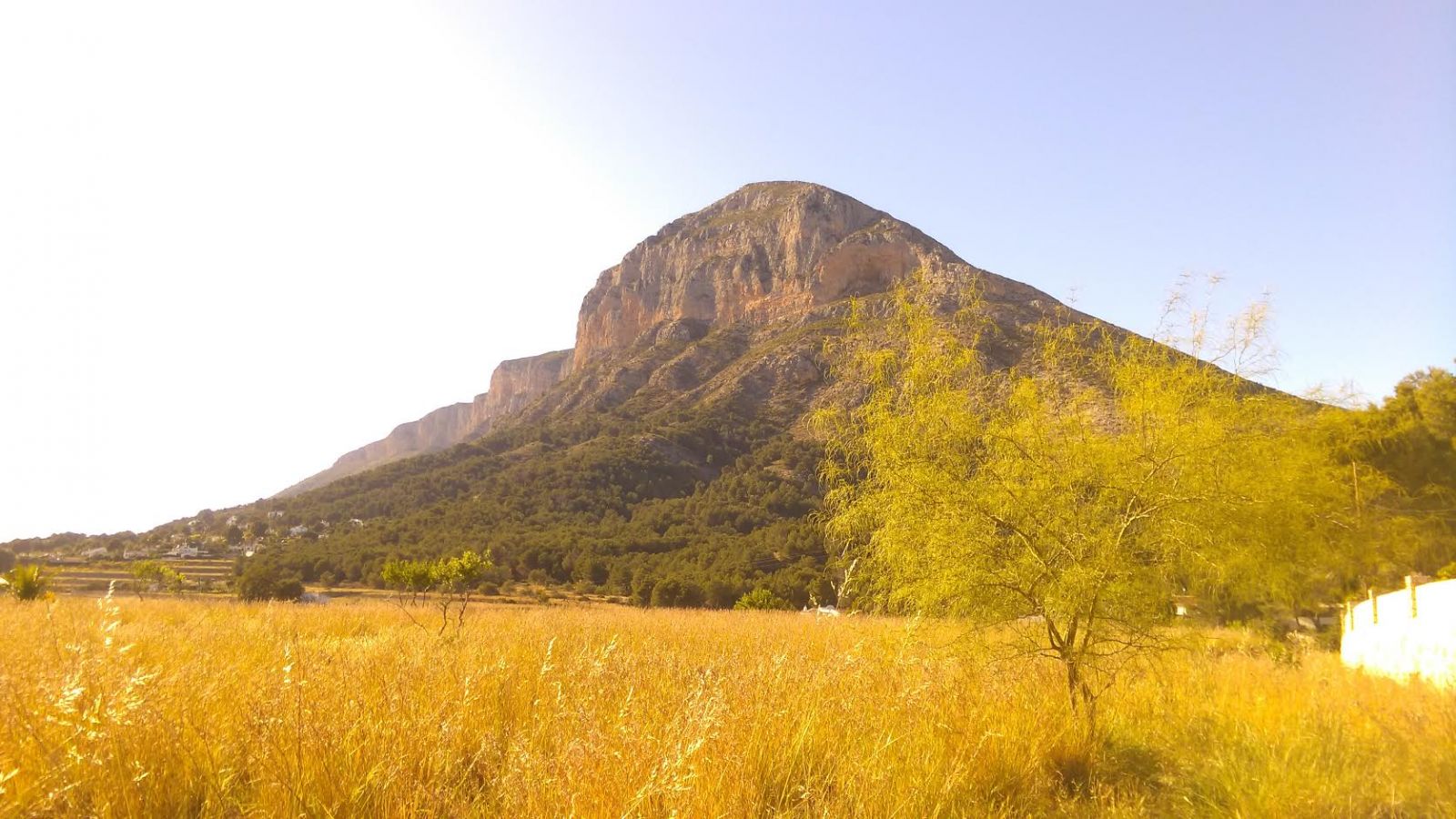 Although Montgo is relatively high at 753 metres, it is possible to climb it approximately 4 hours. It’s well worth the climb as the views from the summit are breathtaking and on a clear day you can easily see the nearby Balearic island of Ibiza.

There are numerous routes to reach the summit. Some are quite easy and others require climbing skills and high fitness levels. The most common route begins at the car park of the Les Planes Campo de Tiro (shooting range) which can be found on the CV-736 road to Denia. Car parking here is free.

The path is clearly marked through nearby woodland. Follow this path until it widens onto the official PR-CV 355 route. Turn right here, facing the mountain and ensure you keep right as the path splits. It gets a little steeper here and after about 500 metres you reach a large sign which maps the entire Montgo reserve.

After a short rest here, take the path to the left of the sign. The path runs through some dense undergrowth and the going gets a little tougher from here on.

This is when the climb really starts, at times rather steep. The path passes just below the ‘Penya Roja”, a distinctive crag of red rock which is a perfect spot to take a breather, refuel and take in the views before the final ascent to the summit begins.

After a short break at Penya Roja, the path continues its meandering steep climb until, after about an hour, it comes to a sudden end at the top of a high cliff which offers stunning views over the valley and out to sea. It’s worth having another fuel stop here as the final scramble to the summit lies ahead.

From here, follow the yellow and white markers on the ridge just behind the cliff. There isn’t a path as such, but just keep following the markers.

As you reach the top of the ridge, a path appears which hugs the cliff face and winds upwards. For those prone to vertigo, it’s best not to look down here, as there is almost a vertical drop to the properties nestling in the Montgo foothills.

As you reach the end of this rather precarious path, you’ll notice a narrow notch in the rock which you can squeeze through to make the final scramble to the summit.

The summit itself is rather unspectacular. Local folklore insists that there is a post box up here but that isn’t true. Instead, you’ll find a rather modest wooden post set in stone and sadly a graffiti-laden concrete pillar. There are mutterings that a large wooden cross that used to stand here will shortly be restored.

But the summit is really all about the views. If you’re lucky and it’s clear, look straight out to sea and Ibiza beckons. Look south and you will see the impressive Ifach rock which looms over nearby Calpe. Looking inland, the mountain ranges of Col de Rates, Sierra de Aitana and the Val de Laguar offer stunning scenery. Finally, face north and take in the gulf of Oliva and Cullera and again, on a clear day, Valencia on the horizon. 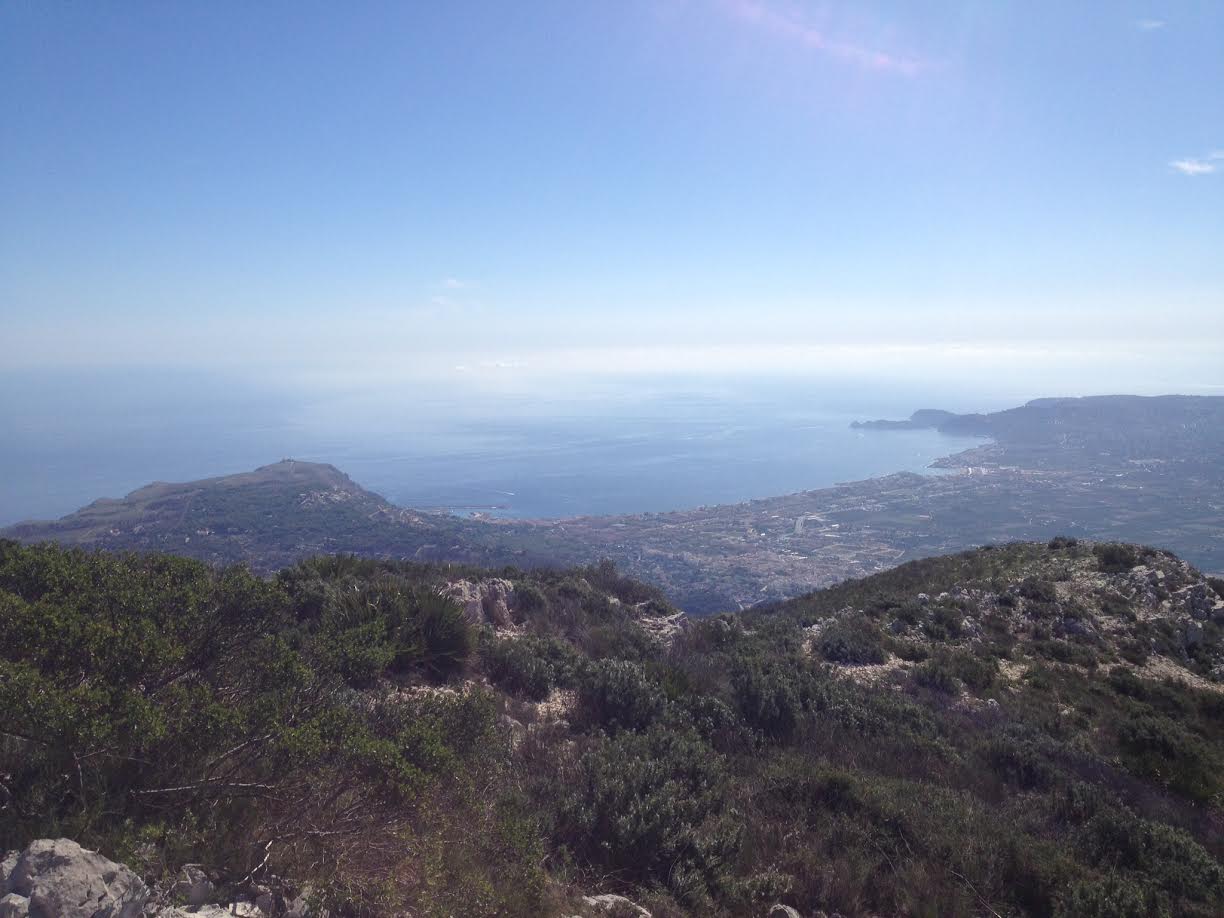 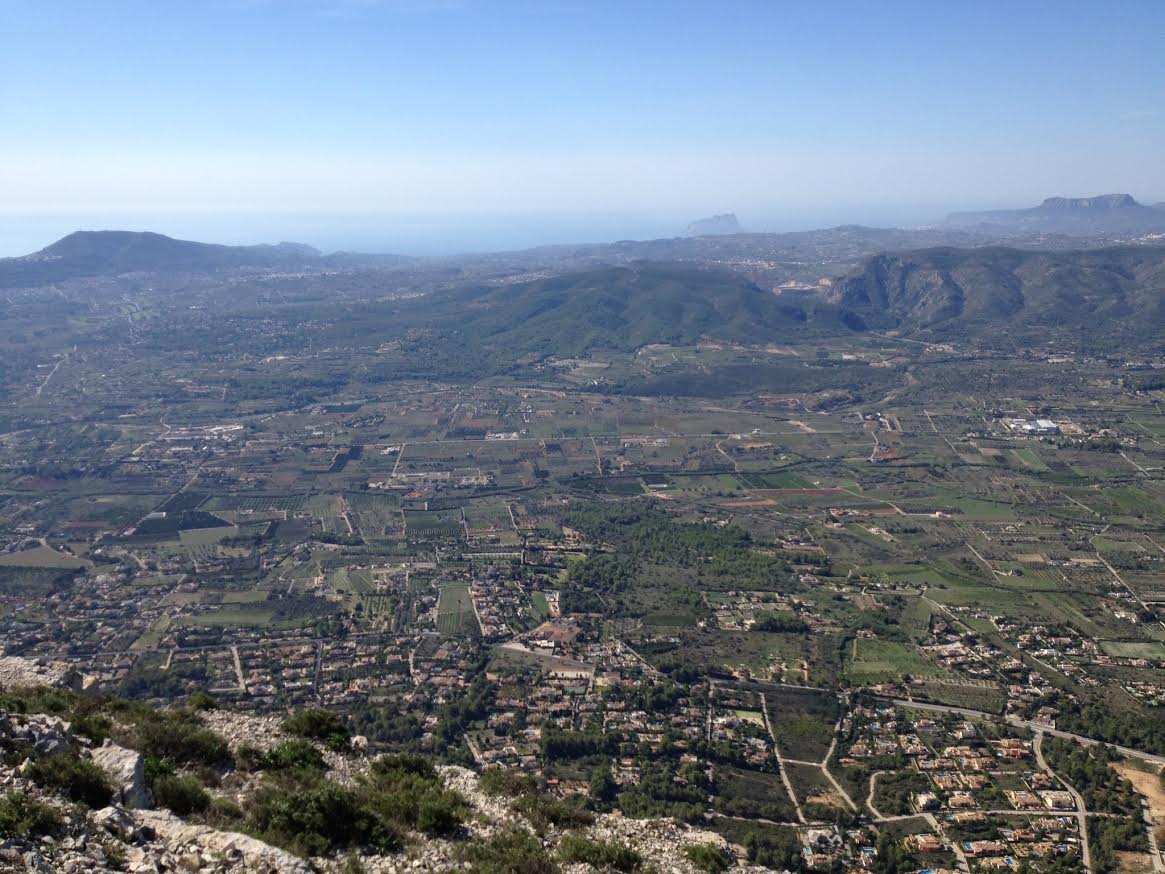